Posted by ralfast on April 20, 2016 in Science Fiction 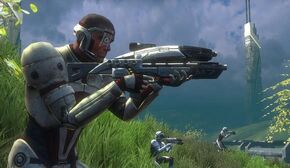 Tweet of the Day:  The Activities of Mortals Weekend Writing Warriors

Excerpt from Modern Galactic War by Paul Malthus, 3rd Edition , Made available for Extranet Scholastic Use by  The Institute of War and Diplomacy, Vancouver Metroplex, North American Union, Earth, 2190 (1st Edition published by Banabar Books in 2184).

Human planner’s belief that whoever controlled space controlled the battlefield, relegated the Alliance Marine Corps to the role of a mop up and security force for the Navy. In addition, Earth’s national governments  feared to give too much power to the nascent Alliance Military through the creation of a large land based force. Instead, the nations of Earth and their colonies would rely on local forces for ground side operations. The Battle of Shanxi seemed to prove that ground forces operating alone could not provide an effective defense for the colonies. However, the rapid human colonization of  the outer reaches of Council space (see: Attican Traverse/Skyllian Verge) led to an expansion of the Corps to serve the function of a “tripwire” force against possible enemy forces that would trigger a massive response by the Alliance Navy.

Subsequent engagements against larger irregular forces from the Terminus Systems proved that this was not always the case. On Elysium (see: Skyllian Blitz), the dogged defense by Alliance Marines plus local militia held off the enemy assault for hours. It bought time for the Navy to deploy task forces to the scene. On Torfan, entrenched enemy forces resisted weeks long orbital bombardment and had to be rooted out by persistent ground assaults, with heavy casualties on both sides.  And the Alliance abandoned multiple colony worlds to Cerberus/Reaper forces due to an inability of local military forces to stem the tide of the invaders.

Yet, the basic tactical structure of the Corps remained intact since it serve humanity well since its inception. Marine units deploy in all-arms aerospace mobile formations known as Combat Groups. These groups range in size from company to brigade light infantry formations (80 to 5000 marines per unit) transported to battle by gunships and shuttles piloted by Navy aviators (an archaic term for a Navy pilot) known as the Mud/Rock Navy flying UT-47 Kodiak shuttles and A-61 Mantis gunships. These craft provide fire and logistical support for ground units. These groups also deploy integrated armor  in the form of powerful combat rovers (such as the M35 Mako IFV and the M44- Hammerhead ARV), flocks of drones for reconnaissance,  man portable direct/indirect artillery and engineers. Their goal is to seize key assets from the enemy, block the movement of enemy forces and reinforce local friendly units.  Regiments and Divisions serve as administrative formations for combat groups under their command. Command attaches certain designations to units such as, Expeditionary (a force deploying with the fleet), Frontier (a forward deployed force), or Garrison (a rearguard defensive formation) to a given unit. However, these are not formal designations but descriptive of their current unit’s assignment.

These local forces tend to take the form of Colonial Militia, who range from small police forces to planetary armies. The quality and quantity of said forces depends on local resources. Their main focus is providing law enforcement and security to the citizens of the colony. Populous colonies with larger economies can field better armed and trained units with aerospace fighter support, orbital defense platforms and dedicated special police units for anti-terrorist/high threat work. Smaller colonies field units of lesser quality in both equipment and training. Some even sub-contract training and defense to private military contractors. Their deterrent factor against armed attack, such as raids by pirates or slavers varies as well. Despite their inconsistent make up, colonial militias have proven valuable in multiple occasions. For example, the colony of Zhu’s Hope (Feros, Thesseus System, Attican Beta)  survived an attack by the Geth (see: Eden Prime War) in 2183 and another attack by Reaper (see: Reaper Invasion and Aftermath) forces in 2186. Battle hardened colonial volunteers helped Allied forces retake Earth after it fell to the Reapers in March 6, 2186.

← TV Tropes Monday: A.I. Is a Crapshoot
Space for Rent: The Antebellum Presidency →