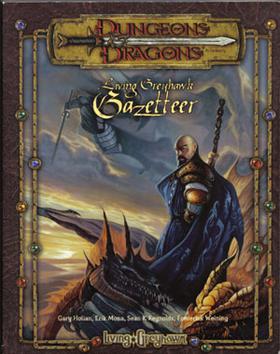 Tweet of the Day: A Price of Game Journalism

Family and Acquaintances of Atreus von Klaus my current character.

Roul fled the initial onslaught of the Horned Society upon his homeland of the Shields Lands. He found refuge in the Free City of Greyhawk, along side his three children, but not his beloved wife, Karigan whom he lost to disease that ravaged the land during the war. Using the remainder of his family wealth he gained a position within the powerful Guild of Lawyers and Scribes (pag. 34 TSR 1043 The City of Greyhawk). Success within the Guild brought him in contact with the most powerful personages in the Free City and with it wealth which he used to support his compatriots fighting to take back his homeland from the putrid grip of the Old One as well as represent refugees from the Shield Lands pro bono within Greyhawk’s notorious legal system.

Alhanna was born among the elven tribes of the Vesve Forest on the frontier between Furyondy and the dread lands of Iuz, she has dedicated most of her life to fighting the demonic tyrant across the central Flanaess. It was in this capacity that she came to know Roul van Klaus and in spite of their differences, she saw a kind, compassionate family man. After a year of their liaison they were married and she bore him a child, but soon her duties took her away from the city. She returned on a regular basis but the burden of raising young Atreusr fell on his father. Still she discovered that her son posses the gift of the Silverwing bloodline and trained him to the best of her abilities to harness that power.

Athos is the oldest of Roul van Klaus children and utterly dedicated to the cause of liberating his homeland from its enemies. As the older brother he witness not only the devastation of the humanoid hordes upon the Shield Lands but the death of his mother to disease. That led him to dedicate his life to the retaking of the area though his devotion to Heironeous. And while he holds the tenants of chivalry in high regard he holds a measure of resentment against his father for marrying a year after his mother’s death, and that resentment, however well he tries to conceal it, spills over when ever his half-brother Artheius is present.

He holds great affection for Acton, the second eldest, but he has spent many years away from the family home in Greyhawk an knows little of the mental instability that ravages the young man’s mind from time to time.

Acton is the second eldest of the von Klaus clan, a brilliant but troubled young man, who is more fond of books than people. While kindhearted most of the time, he is prone to fall into swings from deep melancholy to mad rages. Only the administration of a certain tonic by the alchemist Bartelly can calm him in his worst moments, but leaves him lethargic and unresponsive for hours, if not days. An avid student of the Art, he is a promising wizard in the making but his temperament is ill suited for adventuring. He is close with all his members of his family and holds his older brother, Athos, in the highest regard.

Rita is the only of her siblings that took after her father in the love of the law. She is an excellent administrator of the von Klaus household and has a fine mind for organization which enables Roul to keep the mountains of paper work in order. Roul planned to leave the business to Atreus, but all know that she is the best advocate in the Free City. She already has several court victories under her belt and is hungry for more.

Trisha is an accomplished young wizard, niece of Lord Braven and always looking for new adventures. She met Atreus one day while he rushed to deliver a bottle of tonic to Acton at the University. The bottle nearly fell from his hands as they collided in a crowded corridor full of students between classes. He gave her a quick, “Excuse me,” and ran off with a smile plastered on his face. Furious she followed him only to find Atreus tending to her older brother collapsed in his room after a severe bout of rage. The sight warmed her heart and changed her disposition toward the young elf. It is hard to say who courted whom first, or if their affair was anything like a formal courtship, but it was fast, passionate and happy. However, her uncle, while impressed with Roul von Klaus wealth and position, demanded that the young Atreus prove himself a man of worth before he would relent to allow him to formally court her.

Trisha had other ideas and jumped at the chance to join an expedition to expand the borders of the Shield Lands with Atreus by her side. They were to meet at the city of Critwall to begin their adventures.

← TV Tropes Monday: Artifact of Doom
This is my rifle…. →