Posted by ralfast on September 3, 2014 in Science Fiction 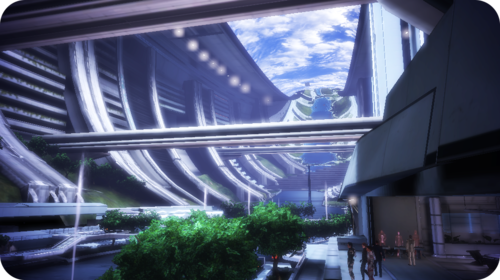 The Presidium, The Citadel

Thane’s green scales reflected the vibrant white light that washed over the Presidium. He looked up at the monument shaped like a tuning fork, “I can understand why so many of my people came to adopt the Hanar’s belief in the Enkindlers. That they came so close to unlocking the secrets of the mass relays is a testament to their prowess.”

“Still fell to Reapers, though. Not a fate I wish on anyone, let alone us,” said Mordin.

“Too big for my mantle piece, but nice,” said Kasumi from under her hood.

Thane bowed to Shepard who nodded in return.

Mordin saluted, “An honor working with you, Shepard. Will forward any findings through STGs channels.”

Kasumi cocked her head, “I don’t suppose you still have Jacob’s contact information. Oh, never mind. I’ll find him on my own. Better that way. Good luck Shepard.”

Shepard exited the lift wearing his dress blues. The crew stood in attention. Whispers of ,”Good luck Commander” and “We are with you, Shepard!” Tali, Garrus and Joker waited by the airlock.

“I still have a shotgun, you know,” said Tali.

“I go where you go Commander. Nothing for me back at the Citadel,” said Garrus.

She shrugged, “I’m Tali’Zora vas Normandy and you are my Captain.”

“Commander, about the Normandy?” asked Joker.

“Part of the deal I made with Admiral Hackett. The Alliance gets the Normandy, at least for now,” said Shepard.

“Yeah, but what about EDI? I mean if the Alliance gets a hold of her?”

“No need to worry Jeff. The odds were against any of us surviving the assault on the Collector base. If I’m to be deactivated, at least I spent the last moments of my…existence with you all,” said a voice behind Joker.

Shepard peeked over Joker shoulder to the glowing AI interface, “You’re a part of this crew EDI.”

Armed Alliance marines waited on the other side of the airlock. They saluted, “This way Commander Shepard.”

Joker sat down on his station, “I guess the Council gets their bone back.”

“My analysis of the current political situation in the Alliance parliament suggests a high probability that Commander Shepard will not face prolonged incarceration,” said EDI.

“Yeah, well what about the Reapers? Without him we are back at square one!”

“Alliance technical staff is requesting to board the Normandy, Jeff.”

The airlock cycled open. A woman with flowing black hair turned left and stood behind Joker.

“As copies go, this is a good one,” said the newcomer.

“And newest member of Office of Special Tactics and Reconnaissance,” added EDI.

“Yeah,” said Joker in a monotone.