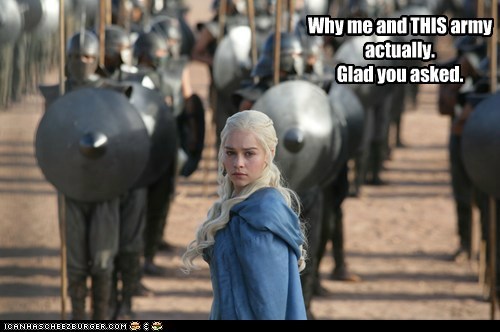 This sub-genre of fantasy puts the dark back into the dark ages. It is an counter argument to the idea of an Arcadian past. The worlds portrayed in dark fantasy are dirty, messy, violent and by our standards immoral. All the familiar elements are there, but with a dark twists:

This last point is crucial to the argument posed by dark fantasy. Simply put the people of the past had different moral paradigms that we do today. Slavery, conquest, serfdom, racism, gender inequality, prostitution, pedophilia…you get picture. We discarded a lot of the concepts that were the corner stone of ancient and medieval civilizations such as divine right of kings or the supremacy of males over females.  Not to mention that even with magic , there are no guarantees of equality or improvement in the overall lives of the average peasants. Practitioners of magic could rule with an iron fist, be persecuted to near extinction or enslaved as weapons of war and tools of government. All of these present a dark contrast to the picture of humanity as inherently good but beset by outside evil. In Dark Fantasy, the monsters are your leaders, your neighbors, your priests and even your gods.

This makes the heroes (or protagonist) that much more interesting. They must survive in an uncaring world, battling demons from within and without. They are still superlative individuals, just like their High Fantasy counterparts, but more often than not their struggle is one of personal survival rather than the preservation/restoration of the status quo. Any victory will occur on blood soaked battlefields against your own kin and will be, at best, transitory.

← Lessons from the Aether: Grand Theft Auto and Immersive Narratives
Space for Rent: Not all things digital are the same →