Posted by ralfast on November 9, 2012 in Blogging & Blogs 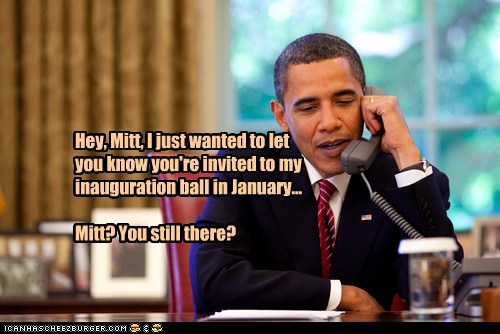 WARNING: Politically charged and heavily opinionated piece. Read at your own peril. I am not responsible for any broken monitors or screens.

The circus is over…is it over? It’s never over, just recasting for the next show. In the mean time I’ll review the last one. But first, take a look at these three numbers:

Those are the numbers that define an American election.

Twenty is for the base of either party.

Sixty for everyone else.

And those numbers are still relevant. In 2008, after an exhausting eight years of Republican rule, the democrats consolidated their twenty and made deep inroads into the sixty, leaving the Republicans with only their own twenty.

Come 2010, after the Republicans rebranded their base with the Tea Party label and the Democrats failed to clean up the mess they were left with (or worse, piled on to it), their twenty stayed home and the sixty had better things to do.

Come 2012, two weak candidates face each other, each one struggled to plant their feet firmly on their own twenty and clawed through the the sixty. The Democrats twenty proved sturdier than the Republican twenty.

The truth, as always, if far more complex than that. Issues matters, specially social issues as well as promises.  Obama failed to bring the change he promised or at least hinted at. No investigations of corrupt officials in Washington or Wall Street, no end to the wars in Iraq or Afghanistan (troops are still in Iraq and more could return at any moment) no closing of Guantanamo Bay, no roll back of the Patriot Act (the Obama administration doubled down on secrecy and whistle blower hunting) and more drone strikes around the world.

So the Democratic base cracked.

The Republican response was not to expand to include these disaffected voters, for they believed in doing the very same things. Instead, by summoning the spirit of the Founding Fathers the rebranded the base and went all in. The Democrats at first ignored the unhinged fringe barreling down on them but when the economy worsened the only ones that showed up on Election Day were the frothing lunatics from the nether regions of the American consciousness.

You go to an election with the electorate you got.

But the new brand was just that, a brand, a sticker and nothing more. The gains at the Federal level were modest, juts enough to embolden the base. A Democrat still sat on Caesar’s throne after all and enough Democrats still wore the anointed togas of the Senate. But at the state level, the place were Republicans know how to push and pull with impunity things were very different. Republicans swept through mansions and capitols. And they went to work with undisguised glee: union busting, privatization, suppression of  women’s rights, dismantling of education.  They gave the Democrats what they denied them in 2010.

Now the Democratic base saw that elections do have consequences. Progressives looked around and saw that while they didn’t like the current state of affairs, they certainly did not want to step into a world birthed by the unholy union of a Handmaid Tale, Fahrenheit 451, and Atlas Shrugged. So they held their noses and voted, at least enough of them and pulled enough of the sixty, especially latinos and women, who did not appreciate being the target of vitriol just for being the feared Other.

Now on the Republicans side there is and will be a lot of hand wringing: Romney was a weak candidate (even though he played to the base the whole time as he was told to do), that the U.S. has fallen into moral corruption (with uber-selfish/atheist Rand pointing a bony finger from her coffin) or simply that they are right and everybody else is wrong.

True, the demographics might be changing, but there is no guarantee that the ratios have changed or will change in any meaningful way.  Whoever plays the numbers right will win in 2014 and beyond.

Because it was always about the numbers.