Posted by ralfast on September 7, 2009 in On writing

Or what I like to call, the Other Side of the Coin (capitalized for your convenience).

But what do I mean by that?

Simple, creators of works (books, games, movies) have to step up to the plate and assume responsibility for their work. It’s not enough to say “change the channel”. Nor is it acceptable to point at studies that dismiss a direct link between sex/violence in media and the same acts in real life.

A writing works when the writer evokes a strong emotional response from the reader. Sure, not everybody is a Don Quixote whose minds overload with images of dragons, swordplay and damsels in distress. But we do seek that emotional spark of inspiration that a good yarn spins in our soul. If that is not influence, I don’t know what is.

So what is a writer to do?

You can write whatever you want, but make sure it reaches the right audience. While Harry Potter and Gossip Girl are lumped under YA, I would have no trouble handing a 10 year old a copy of the Philosopher’s Stone, but I would be weary of handing a 15 year a copy of New Moon. The first is geared for a younger audience but it’s flexible enough for all ages 11+ while other fare under YA is really for older teens are actual young adults (18+).  You can’t control who will buy your book, but being up front about who your target audience is will certainly help.

Your book may hit the right audience as far as it’s intended age parameters are concerned but then Hollywood/Madison Avenue came calling. They want movies, comic books, computer games, you name it. A year or two later you see the trouble heroine who fought back against the legions of the undead to rescue her father (each battle described in gory but precise language) turned into a Happy Meal toy, even though you seen the advance trailer for the movie and it has twice the gore and thrice the intestines of the book.

You could take the money with the backlash and run or you could step up and say “this ain’t right!” No backdoor advertising for you. No enticing of 6 year old with action figures to get their parents to buy them the video game this Christmas before the stores run out.

I am NOT saying that you have to keep your characters prim and proper, your battles bloodless.  But remeber, if you write it you own it. Be responsible and make sure it get’s marketed to the right audience. That, above anything else, will undercut the legs from under the censorship hounds lusting for your work. 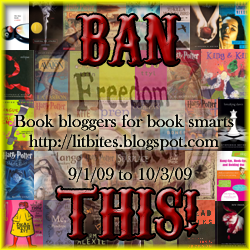 And now for some music from Properllerheads: